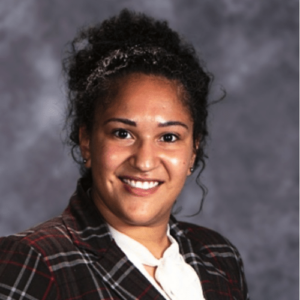 Brenda Cora, a Chicago Native, began her Noble career as a student and a part of Noble Street’s Class of 2003 where she graduated at the top of her class. Like many of our Noble scholars, Ms. Cora made the decision to go on to college after high school, and she received a Bachelor of Arts in Economics with a concentration in Gender and Women’s Studies at Grinnell College. After receiving her degree, Ms. Cora began her professional career at Rowe-Clark Math & Science Academy as the Dean of Students, where she spent time collaborating and leading staff to help students promote and move onto college like she herself had done. She spent six years at Rowe-Clark in this position before she took over as our Principal in the 2013-2014 school year. As someone who grew up on the West Side of Chicago, attended a Noble school, and was the first in her family to attend college, it’s been rewarding for her to be able to serve as a role model to students and show them that, no matter what challenges they face, success does follow hard work and persistence. Ms. Cora is excited to provide a safe and focused learning environment for her students at Rowe-Clark Math & Science Academy in the years to come.

20 Years Ago I Started at Noble Charter Schools as a Student. Now I'm a Principal.