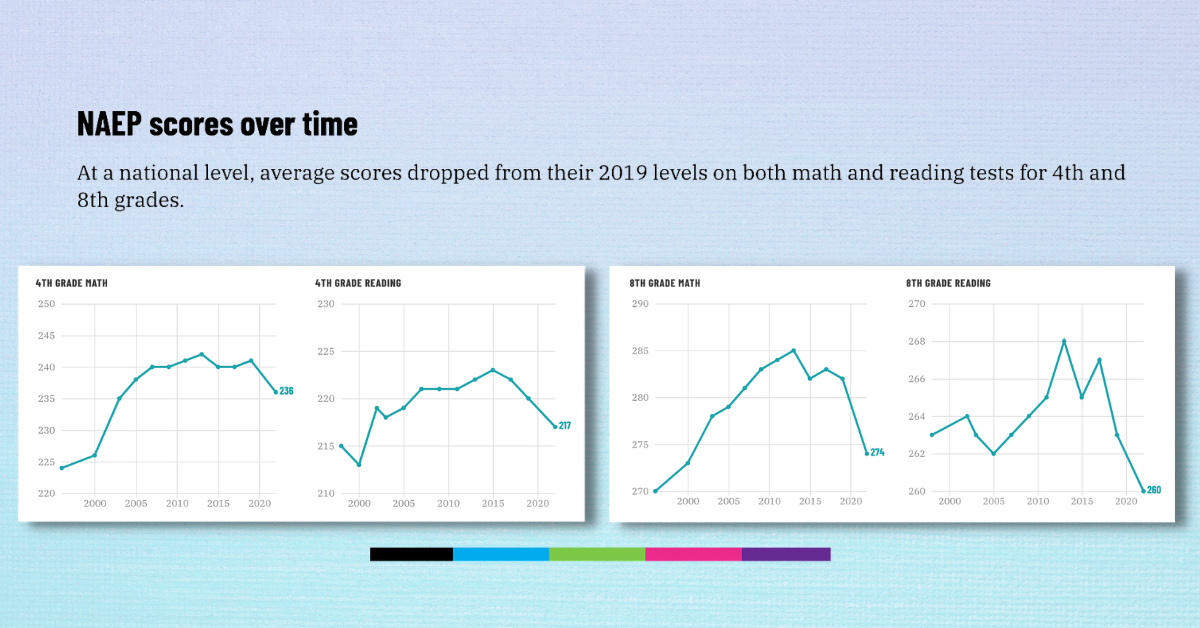 Let's Not Go NAEPShit. Here's What You Need to Know.

You will likely hear plenty about the COVID-19 pandemic’s impacts on how America’s students performed on the National Assessment of Educational Progress (NAEP). NAEP is the gold-standard test checking American students’ educational progress, and has been for the last 30 years.

Bottom line: Things are bad. The latest results show that two decades of testing improvements have been wiped out, with American kids now performing roughly as they did in the 1990s, before decades of education reforms.

But the Coronavirus can’t take all the blame, no matter what so many headlines say. Students did not excel on NAEP, otherwise known as the nation’s report card, before the pandemic began.

It is likely true that two-plus years of pandemic disruptions contributed to this year’s slide, but the big picture is this: U.S. students across the board needed major systemic improvements to the education system long before the first American school went into lockdown.

Results for students who took the test in spring 2022—the first main National Assessment of Educational Progress administration for these grades since the pandemic began—show the biggest drop in math performance in 4th and 8th grades since the testing program began in 1990. In reading, 4th and 8th graders likewise are performing on par with students in the 1990s, and about a third of students in both grades can’t read at even the “basic” achievement level—the lowest level on the test.

“Nationally, 33 percent of fourth-graders scored at the proficient or advanced levels on the 2022 NAEP reading assessment, down 2 percentage points from 2019,” wrote Future Ed’s Bella DiMarco. “The share of proficient students also fell two points at the eighth-grade level, from 33 to 31 percent.”

If you were hoping for good news on math, unfortunately things are even worse in that department.

“At the NAEP's fourth-grade level, the rate of students scoring proficient or above fell from 41 percent in 2019 to 37 percent this year,” DiMarco wrote. “Among eighth-graders, the proficiency rate fell from 34 to about 26 percent.”

The Problem Is Bigger Than the Pandemic

Importantly, there appears to be no meaningful statistical difference between schools based solely on when they re-opened :

Students in states that re-opened schools quickly during the pandemic often performed no better than those in states that stuck with remote learning longer.

While many people are taking this opportunity to re-litigate whether schools should have closed, the real question is: how do we help kids now?

The feds are making big noise about the need for a coordinated national response. As Education Secretary Miguel Cardona said earlier today and quoted by the  New York Times, “The results in today’s nation’s report card are appalling and unacceptable. This is a moment of truth for education. How we respond to this will determine not only our recovery, but our nation’s standing in the world.”

But parents are not convinced that elected officials will walk this talk. “Our president, governors, local school boards–they’ve got to stop protecting the system and the status quo,” said Sonya Thomas, leader of Nashville PROPEL, a parent movement demanding equity and excellence from the city’s public schools.

“Parents like me have lost faith in the system. It’s time to reinvent education.”

What You Can Do

Indeed, the national walk to back up national talk like Cardona’s comment has been very slow in coming. But the effort to support the nation’s children toward true academic success took an important step forward in July with the launch of the National Partnership for Student Success.

The Partnership has committed to bring 250,000 more adults into schools to support young people through tutoring, mentoring and college advising.

Click here to learn more about the Partnership and to volunteer.

Hey Shawnta! NAEP Scores Are a Disaster. How Do We Improve Students’ Academic Outcomes?