It Was the Worst Moment of My Teaching Career, And I Was the Problem

One of the best teachers I have ever known has a tattoo on the inside of her wrist of the snake from “The Little Prince.” She told me it was her reminder not to crush students’ dreams. Between the years of 2007 and 2016 my car had the word “Bitch” keyed into the hood. Perhaps LaToya Duran (pseudonym) thought I needed a similar reminder.

I don’t have proof, but I’ve always assumed that she did it. That morning I had parked without any curse words etched into the hood of my car. LaToya was sent home in the middle of that day after being removed from my classroom by a police officer. When I went to drive home, a student ran up to me in the parking lot, “Mr. Davidson, somebody wrote on your car.” LaToya was mad at me. She had opportunity and knew what kind of car I drove. It was probably her.

She had been off-task, sleeping in class. It was the first month of my first year of teaching, working in a charter high school, only a few years older than my students. I tapped the desk, hovered near her. No response. I asked explicitly. No response. “Hey, I’m talking to you.”

“Leave me alone.” I think I probably talked about her participation grade or the zeros she was earning or calling her parents or something. I did not ask her why her head was down. I did not give the class a discussion question to mask the conversation. I’m sure I was posted up opposite of her, leaning forward, almost over her, both hands on the desk on either side of her head as she laid on her cheek. She may have had tears already trickling down her face. I did not drop down to her side. My voice was not a whisper. She stood and began aggressively cursing at me.

There are a thousand things I could have done to deescalate that moment. I know the tricks now—I dedicated myself to learning them as quickly as possible after this episode. I could have communicated through writing, offered her a chance to get some water, asked her if everything was okay, given her a snack. I could have just ignored her—almost anything other than lording authority over a kid who was obviously dealing with something. But I was armed with the wrong philosophy.

I thought the goal was high expectations. I thought I needed LaToya to work because her achievement was a blunt indicator of my value as an educator, as a person. I needed her to work so that I could tell myself that I was doing a good job. I’m sure I thought, somewhere in my baby teacher brain, that I needed her to comply so I wouldn’t have my authority undercut so publicly—as if authority in a classroom weren’t entirely imaginary. Imagine what would happen if every student flung their Chromebooks out a window and yelled, “Mutiny!”

So LaToya got up and let loose a string of varsity-level curse words at me, and I stepped forward, not backward. She raised her voice, and I raised mine. I can’t remember what I was yelling at her, but I cannot imagine a single appropriate thing for me to be saying at that moment. She threatened violence, and I stepped closer, mentally daring her to do it. In the process I cut off her path to the exit, cornering her. Another teacher, hearing the ruckus, called the school resource officer. He arrived quickly, zip-tied LaToya’s hands behind her back, and led her, spitting and cursing, out of the room.

Kids got quiet, sat down, did their work. They looked at me out of the corner of their eyes with disappointment or hatred or something way more intense than I knew what to do with. None of them spoke for the rest of class. I had traumatized every student in the room, not just LaToya. For what? I controlled my breath, but my mind was racing for the rest of the evening. It is probably the single worst moment of my teaching career. Scarier and sadder things have happened, but in no other moment had I so clearly caused the problem.

I Was The Problem

I caused that problem by forgetting that I had been a kid in that same position many times. I had slept through classes, been depressed for whatever melange of serious and frivolous reasons. I had needed to be left alone and largely had been in those moments. I also had told more than a couple of teachers to go fuck themselves, and luckily for me, they backed down. I do not think I would have.

In that moment, LaToya needed me to see her as a person, not a direct report. She needed me to be there for her, not be there at her—where my whole identity, my Whiteness, my authority, my insecurity, my very different background all became weaponized at once.

So when I saw my car, I thought, “That’s about right. I deserve that,” and I left it there. At first it was less of a choice than just the default due to my fledgling adulthood. In my first year of teaching, I struggled to consistently do laundry and get rent in the mail on time—what did I know about buffing out a scratch or finding a body shop? But eventually I knew that I could fix it, and I chose not to. It remained until the car was totaled by a teenager who had stolen his mother’s Taurus and drunkenly side-swiped my parked vehicle outside my front door, almost 10 years after the incident.

A few days ago, I watched this police bodycam video of a 6-year-old being arrested and thought of LaToya. These circumstances are definitely different—LaToya was much older, and her idiot teacher’s inexperience had pushed her into a much more volatile state. Still, I cannot imagine either situation happening to my daughter. When she was six, her classroom had a "Peace Corner" where kids went to calm down and there were behavioral specialists to isolate students who rejected the classroom systems. My daughter has attended four schools. None of them have had a resource officer.

By the time an officer is involved, so many things have gone wrong. I saw the video of Philando Castile’s murder by police and remember a White colleague of mine putting words to my worst fears: “We aren’t substantively different than that cop. We just don’t have guns.”

Teachers and students get in power struggles, and on the pages of Worldstar they even get in fistfights. Students might not always be in the right, but a teacher escalating a power struggle is definitely in the wrong. We’re the adults in the situation. We should be able to fall back on our training and experience (these days, I calmly do). That training may need to be more specialized when working with certain populations. It seems like striking teachers in Chicago (and soon St. Paul) know this and have tailored their demands to bolster their ranks with health and mental health professionals.

I am not sure if I needed to make a mistake of that caliber to learn, but I wish like hell it had never happened. The kids did not hold it against me–it was, unfortunately, not a rare occurrence in that school. I do know that I worked hard to learn more about LaToya from that day on.

She was a great dancer. Her smile was wide and seemed to explode from her face, knocking her head back with no hesitation. She was an enthusiastic but terrible singer, and her friends were impressively loyal. When she acted silly or told a joke, she looked at the eyes of those around her, drinking in their amusement. She did spirit week to the nines.

And she was diagnosed with Emotional Behavior Disorder in first grade and had a history of trauma stemming from her mother’s boyfriends. She was a 17-year-old freshman when I taught her, dating a man who was older than I was. Her mother knew and did not mind.

LaToya’s reading level was below third grade. Her head might have been down because she thought the work was confusing. She might have gone through any number of things on the way to school that day—Baltimore city busses can be dangerous. She could have been triggered by a wave of grief for a family member or a pet or gotten in an argument with her boyfriend.

I’ll never know what it was. I have to live with that.

A version of this post appeared on Derek's personal blog.
Photo by Paolese, Adobe Stock-licensed. 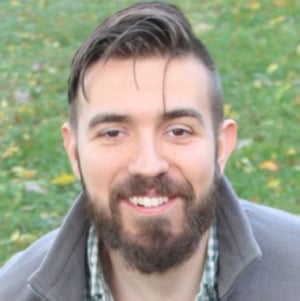 Derek Davidson has spent the last 15 years as an educator in Texas, up and down the East Coast, and in Minnesota. He is a father, husband and chef who blogs about mental health, education and relationships at www.esotericderek.com.
View profile