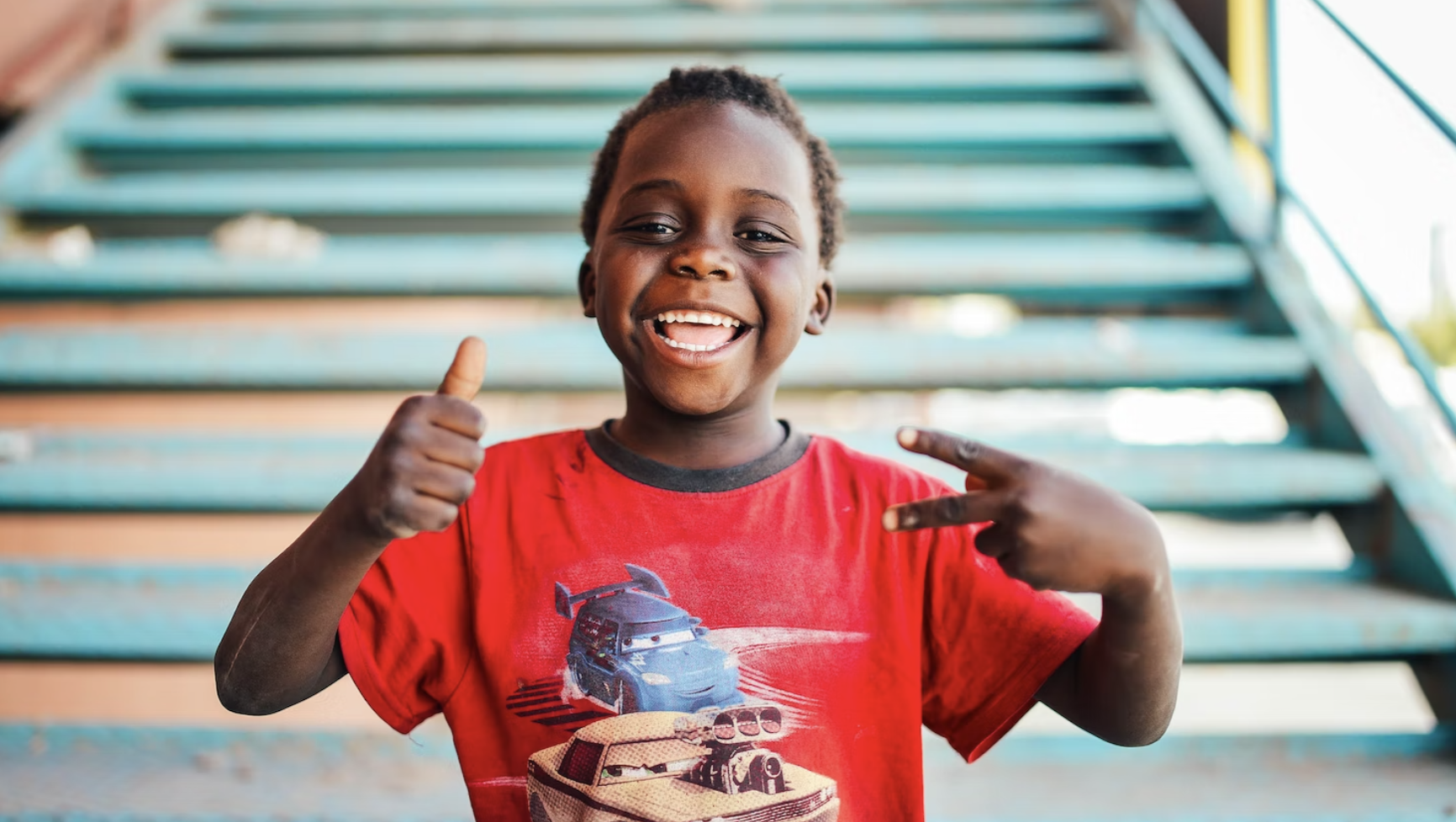 Okay y'all, I got a confession to make. I have a love-hate relationship with mathematical algorithms–those simple step-by-step directions that can be used to solve problems. The real math folx know what I mean by this, but for those of you who are reading this and scratching your head, allow me to explain this further.

The main reason why I was so successful in math through my K-12 schooling was because of my ability to memorize algorithms and follow them step by step! Algorithms were, and still are, my cheat codes when it comes to performing computations!

I can’t even imagine what my career trajectory would be if those cheat codes never came into my life. How would I function? Would I still have the same love for math? Would I have studied a totally different major in college?

Sadly, I will never know what that life would have been like.

What I do know is much of my mathematical success is owed to algorithms. I’m not ashamed to admit that, because so many folx from my generation were taught math in a manner that made us super-dependent on those magic cheat codes to achieve success.

Do algorithms serve as an important purpose in the math classroom? Without question! They serve as the foundation of our mathematical reasoning. However, they are also the cheat codes that can sometimes give us a false sense of invincibility and, dare I say, irrational confidence as math learners.

It wasn’t until I was a 25-year old aspiring teacher in graduate school that I realized that math was so much more than solving computations. It was also the moment where I learned how much of a thinking game math truly is. As a soon-to-be rookie math teacher, I knew I needed to strengthen my mathematical reasoning in order to respond to the highly anticipated “why” questions I would receive from my students.

I knew it wouldn’t be enough to simply teach students algorithms by modeling the steps for solving different problems. I needed to be able to justify to my students why those steps were done and how different math concepts were connected to each other. With each passing year in the classroom, I became more intentional about exposing my students to the interconnectedness of the different math concepts they were learning so that they could use that as a guide to uncovering other discoveries on their own.

I wanted my students to experience the beauty of exploration and discovery in math and be empowered by the mysteries they uncovered along the way.

There’s no greater feeling than uncovering a cool math mystery!

Whenever I bring up this topic, I immediately think about my father-in-law, Garfield Gill, who was a Boston Public Schools bus driver for more than three decades before retiring a few years back. Keep in mind that he started his bus driving career in the early '80s, which meant that the GPS wasn’t around. In order for my father-in-law to get around the city, he had to learn multiple routes to avoid major traffic jams and reach the homes of the students he was transporting to and from school.

Sometimes, that required him to think on the fly and drive down new routes that he wanted to explore or discover. There were times where those new routes would lead him to dead ends but then there were other times when those routes would connect to streets he was already familiar with. Through that process of trial and error, he developed into an effective driver.

After 30-plus years of driving around the city of Boston without a GPS, my father-in-law retired knowing every shortcut and back road there is to know in the city. To this day, if my mother-in-law or my wife are sitting in the passenger seat and they try to pull out the GPS for directions, my father-in-law will tell them it’s not necessary because he pretty much has the whole map of Boston embedded in his brain.

Although the GPS can quickly identify the set of steps that will most efficiently direct him to any destination, my father-in-law’s passion for showcasing his driving skills and geographical knowledge of Boston reigns supreme every time.

I would love for every math learner to be equally as confident in their mathematical reasoning as my father-in-law is in his navigation skills behind the wheel. Even though my father-in-law had his fair share of wrong turns and dead ends throughout his career, those moments didn’t discourage him from getting behind the wheel to try out a different route. If anything, it made him more determined to perfect the driving routes he was taking everyday. His persistence stems from the fact that he knew he put in the time and effort to perfect his craft.

That’s the same approach our math learners must take to thrive in the classroom.

Mistakes offer them the greatest opportunity for growth because they force them to think through their mathematical reasoning, as opposed to searching endlessly for that “perfect” algorithm to solve the problem. The more that we can allow students the chance to make mistakes and reflect on them, the more they will deepen their mathematical thinking.

Ultimately, our math learners need to know that a successful math life is possible without over-dependence on algorithms. A few days back, I taught a mini-lesson on adding decimals to my fifth-grade tutee. For the first example, I modeled the standard algorithm with him but then we used that same example to investigate how to solve it without using the standard algorithm. Our work is below: 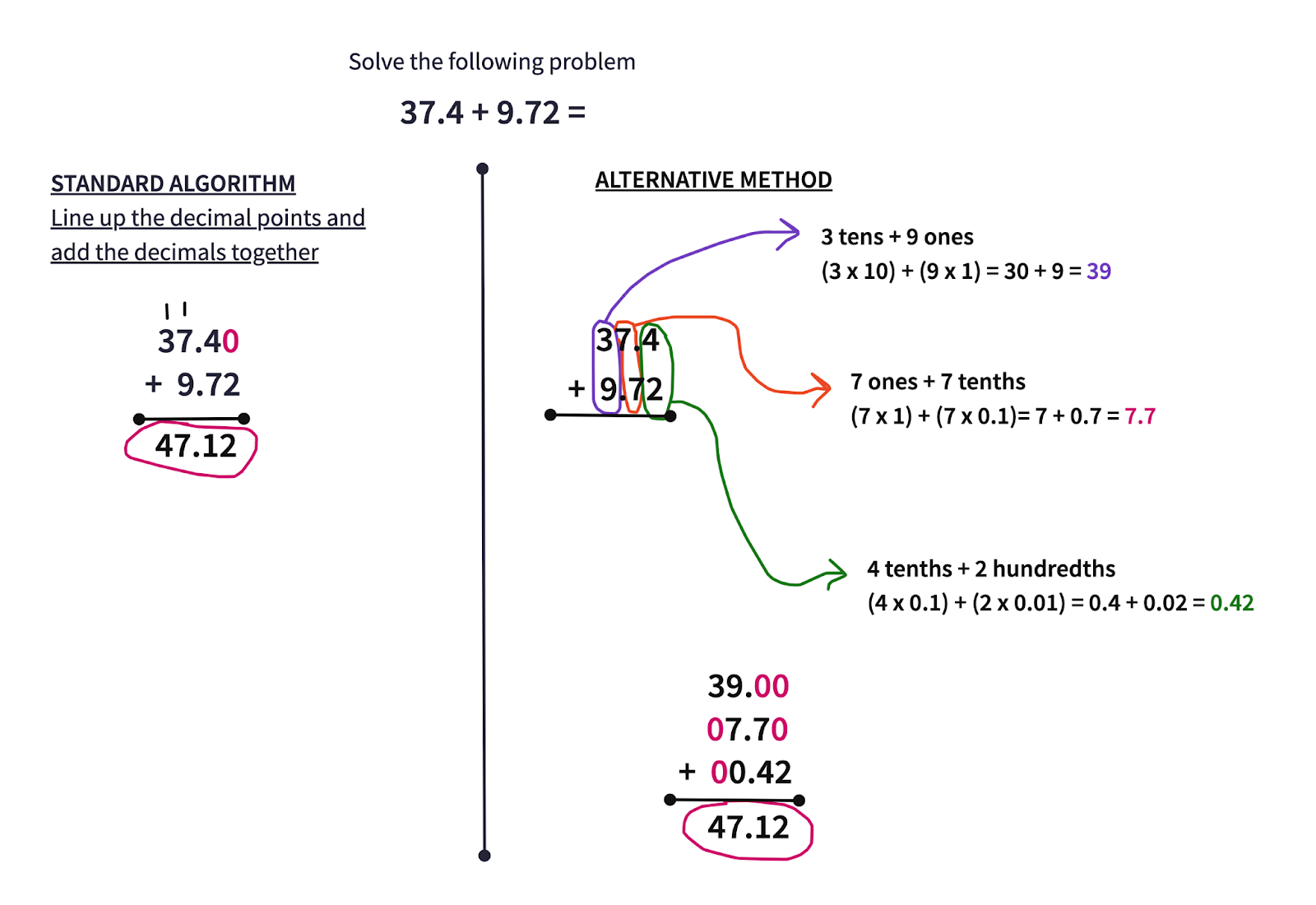 Although solving that problem with the alternative method took us probably three times as much time as the standard algorithm, the experience was powerful because it exposed my tutee to the conceptual rationale for lining up the decimal points. Given that we had spent the previous couple weeks learning about decimal place value, the alternative method allowed him to activate that new knowledge to solve this problem.

If all I did was model the standard algorithm and immediately gave him 25 routine problems to solve, he would have never discovered how critical it is to understand place value when adding decimals.

That’s where the real learning happens!

As math teachers, if we can normalize the habit of teaching beyond the algorithms and pushing our students to adopt the activation of mathematical reasoning as their default response to problem solving, that behavioral change alone can be the difference between a student who’s distancing themselves from math and one who’s embracing the spirit of mathematizing and all of the challenges associated with it.

Algorithms may guarantee a correct solution every single time, but too much emphasis is placed on getting the solution right instead of understanding why the solution is right. When a student is able to articulate why a mathematical solution is correct, their confidence shoots up to another level!

Their confidence rises even more when they lend tutoring support to struggling classmates, or point out a mathematical error made by their teacher. A correct solution is cool, but there’s no greater feeling than seeing a student look at any mathematical problem they encounter and say, “I got this!” That optimal level of social-emotional wellness is what we should be pushing all our math learners to achieve.