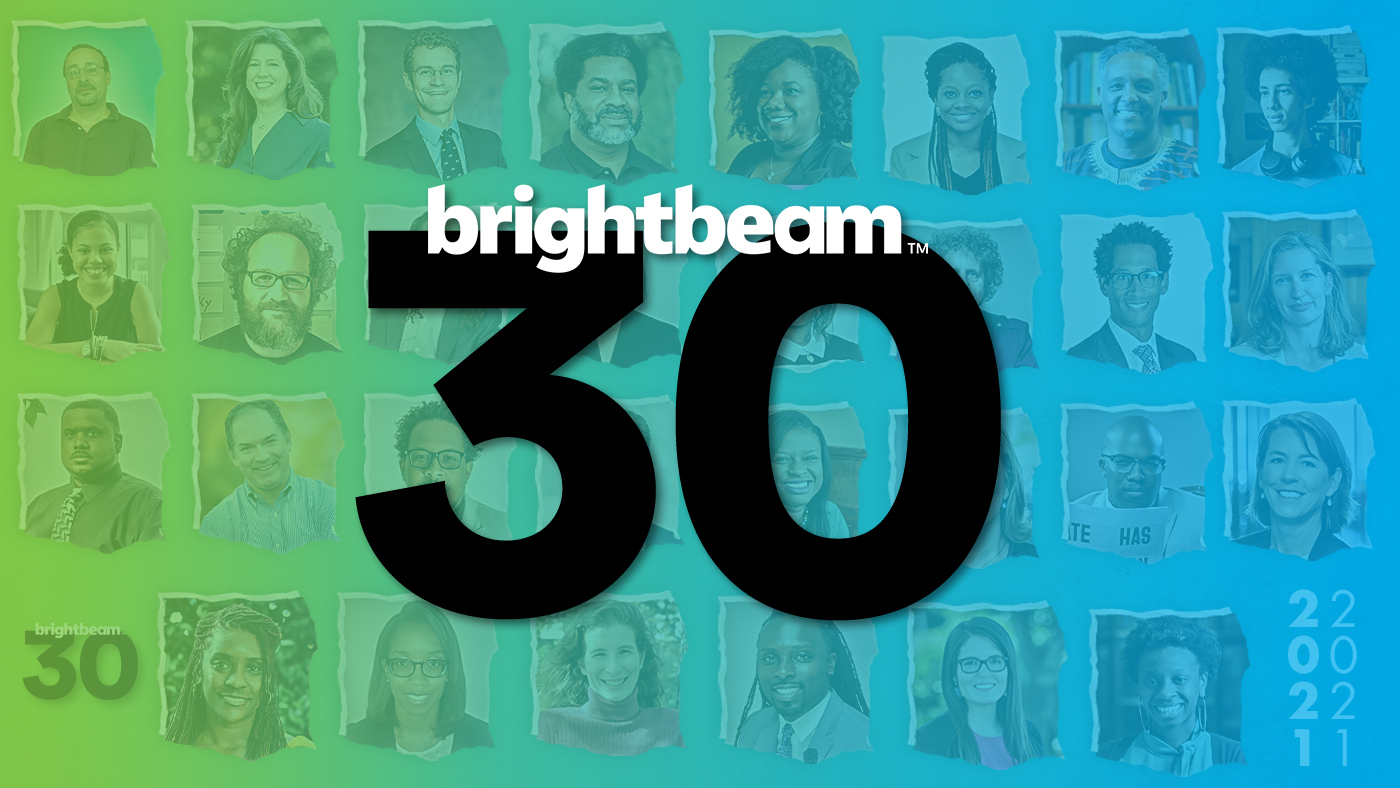 It’s been a wild year for education, from unprecedented federal investments in our nation’s kids via the American Rescue Plan to endless conversations on critical race theory. Throughout it all there have been education leaders who have stepped to the forefront to meet the challenges head on. Here's a shoutout to the work being done on behalf of children.

1-Dirk Tillotson
When President Joe Biden signed the Infrastructure Investment and Jobs Act into law last month, one key contributor to that transformative legislation for students was unable to celebrate. Digital inclusion activist Dirk Tillotson spent the pandemic shaping minds, hearts, and the policies of the FCC and internet service providers through his Citizen Ed shows, Access Denied in 2020 and Desegregate the Internet in 2021. Millions of children who had been locked out of digital learning got help because of Dirk. Most of what Dirk advocated made it into the law’s broadband expansion plans. Tragically, we lost Dirk in the fall to senseless violence during a home burglary gone wrong. We strongly urge you to read this wonderful ode to his work.

3-Jason Allen
It’s hard to find someone who stood up for students better in 2021 than Jason Allen. The teacher, EdLanta founder, and TDRS co-host took his child advocacy further than ever before, launching his first bid for public office. Learn more about Allen’s run for the Atlanta School Board here.

4-Shawnta Barnes
Indy K12’s Shawnta Barnes kept the ball moving for Indianapolis’s kids in 2021 despite stepping outside the classroom. Barnes’ endless pursuit of better processes for teaching children can be found at her author page here.

5-Tequilla Brownie
TNTP Executive Vice President Tequilla Brownie continued her relentless pursuit of better educational outcomes for students in big ways this year. Check out her excellent first-generation college student piece here. Some congrats are in order, as well: She's taking over TNTP in the new year as CEO.

7-Karin Chenoweth
Education Trust writer-in-residence Karin Chenoweth had herself a big year. She and her team launched Ed Trust’s first-ever podcast, where they covered the ins and outs of education in this wacky year. Check out more here.

8-Dr. Tommy Curry
Dr. Tommy Curry tells the stories of Black men across history. In August, he joined #BuildingPower to talk about how power structures are socially determined, and that we can create social movements to change those structures.

9-Romy Drucker
Now in charge of the Walton Family Foundation’s K-12 education program, The 74 Million co-founder Romy Drucker is reshaping how the nonprofit world better serves students and families across the country.

10-Sharif El-Mekki
Center for Black Educator Development founder and former Philadelphia charter school principal Sharif El-Mekki brought his longtime advocacy for Black teachers to another level in 2021. He chatted regularly with brightbeam CEO Chris Stewart on Stewart’s Freedom Friday Facebook Live show, in addition to chopping it up with the 8 Black Hands fellas every week. His Voice To Action petition demanding teacher diversity was joined by dozens of organizations and thousands of individuals.

12-Paige Kowalski
Researcher Paige Kowalski and the Data Quality Campaign kept up a steady stream of coverage this year on how American schools can make data work for students. Check out what she had to say about that during the October town hall we had on data privacy.

13-Robin Lake
Robin Lake and her team at CRPE spent 2021 planning something big for the future of American education. They recently announced a partnership with Arizona State University’s Mary Lou Fulton Teachers College. Learn more about what this will mean for the teaching pipeline here.

14-Nekima Levy Armstrong
Twin Cities activist Nekima Levy Armstrong stood up for Minnesota kids in every way possible this year. In addition to her work with Justice For the Cities, she hosted her own Citizen Ed Facebook Live broadcast. Following the guilty verdict for former Minneapolis Police Officer Derek Chauvin in the murder of George Floyd, Nekima hosted juror Brandon Mitchell to discuss the deliberations. Check out all of Rise Up here.

15-Lorena Lopera
New England’s executive director of Latinos For Education, Lorena Lopera, made moves all year. Boston’s kids get to benefit as a result. She has been re-appointed to the Boston School Committee by newly elected Mayor Michelle Wu.

16-Denisha Merriweather
The American Federation for Children’s Denisha Merriweather got involved in Project Forever Free’s fight for family autonomy in education in 2021, regularly writing on behalf of entrepreneurial, family-focused educators like herself. She founded Black Minds Matter, leading to this report on how Florida is serving Black students.

17-Rann Miller
Teacher and writer Rann Miller has been working for education equity for a long time, and 2021 was no different. In addition to his Urban Education Mixtape, Miller kept knocking it out of the park with his writing at Citizen Ed.

18-Shaka Mitchell
Educator, author, and father Shaka Mitchell joined Citizen Ed CEO Chris Stewart to discuss what he and the Tennessee chapter of the American Federation for Children are doing for the Volunteer State's children.

19-Kwame Sarfo-Mensah
Education Post’s newest columnist, Kwame Sarfo-Mensah brought his experience as a math teacher and proven developer of teachers to a nationwide audience in 2021. Check out his entire collection of pieces here, but don’t forget to check out this one in particular so you can level up your own school library in 2022.

20-Keri Rodrigues
The National Parents Union’s Keri Rodrigues was all over the country in 2021, standing up for families’ rights as they fought educational inequities and gun violence. Read her powerful words, among many others’ harrowing stories, in this U.S. News piece.

21-Andrew Rotherham
The EduWonk himself, Andrew Rotherham kept busy in 2021 explaining a bevy of new federal action for students. Learn more here about what he and Bellwether Education Partners are doing to break down the complexities of education policy into plain English.

22-Marguerite Roza
Georgetown professor Marguerite Roza was knee-deep in the shifting forces behind education finance decisions this year. Learn more about what she and the Edunomics Lab are doing to help decision-makers make better choices with federal money.

23-Naomi Shelton
The Charter Collaborative’s Naomi Shelton made connections between school leaders of color in big new ways in 2021. Check out her Freedom Friday appearance, celebrating Charter School Week. She and the NCC UnConference celebrated their fifth anniversary as well.

25-Shayna Terrell
Not only is Shayna Terell serving Black youth/future teachers through the Center for Black Educator Development, but she has spent 2021 hosting one of Citizen Ed’s most impactful broadcasts. Watch Building the Black Educator Pipeline and learn how you can help.

27-Gregory Wickham
The newest author and change-maker at New York School Talk and Project Forever Free is teaching himself these days after he dropped out of one of New York City’s most prestigious high schools. He knew he could serve his own needs better and he took time out of his busy learning schedule in 2021 to show others how he did it. Learn more here.

28-Conor P. Williams
Conor P. Williams of The Century Foundation spent 2021 showcasing what a better world could look like for all students. Check out his piece on equity for dual language learners here.

29-Zachary Wright
A longtime Education Post contributor, Philadelphia-area teacher educator and activist Zachary Wright is releasing his first book soon! Learn more about Wright’s debut book, “Dismantling a Broken System,” and place a preorder if you’re so inclined, over at his author page.

30-Lakisha Young
The Oakland REACH’s Lakisha Young doubled down on digital inclusion for Oakland kids in 2021. Learn more about how she and her team fought digital redlining here.

EXPLAINED: The Emergency Broadband Benefit and How to Make Sure It Reaches Families Who Need It