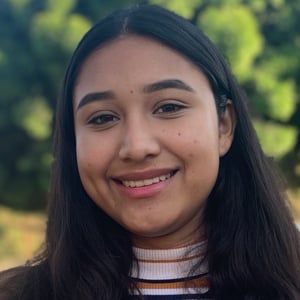 Karen Balbuena is an upcoming graduate from Lincoln High School located on the eastside of Los Angeles, California. Throughout high school, Karen became involved in many social justice clubs that target young people, such as herself, to bring about dignified change in her community. Centered by her economic and housing insecurity, Karen has led "Know Your Rights" workshops and gathered data from youth across LA county about their issues and needs, bringing impactful change not only to her peers but the wider Los Angeles community. She plans to major in psychology and eventually become a therapist to return to the eastside. Her goal is to support the mental health of her community and destigmatize the barriers that people face when confronting mental health challenges.

For My Family, Seeing Their First-Gen Latina Daughter Walk Across the Stage Would Have Been Everything